Because of a photo I saw of this movie was that I wanted to watch it. The plot got my attention a little, but I couldn’t understand it so I watched it to get my own opinions bout the film.

From the very beginning you can notice everything is a mess, the life of the three main characters are a chaos for many different reasons, that through the film we find out, before to watch the movie I thought that Maria Bello’s character was part of William Hurt’s imagination, but later I found that it wasn’t. Eddie Redmayne is phenomenal on the film, so cute, so sweet, the best performance I’ve seen of him.

On the other hand Kristen Stewart, now finally surprises me, I hadn’t see her so expressive since Zathura, I’m not her biggest fan and i don’t hate her either,  I like her as a person, not that I’m her friend or anything, just know her from what the press says and for me, she seemed to be a common and down earth girl, but as an actress she still had a long journey ahead.

Maybe someday Kristen choose a role where she really portrays a different side from her acting skills, so far I’m waiting anxiously the release of “Welcome to the Rileys” maybe on that one she really amazed me, but you never know, something the trailer is better than the movie itself but I trust on Gio’s (producer of the film) words, he says that Kristen will surprise everyone with her performance; meanwhile I’ll have to wait and see that movie so I can give my opinion bout it.

But I was talking bout ‘The yellow handkerchief’ by the end the story gets very emotional, Will’s character Bert, help these two young kids to be less rude form Martine’s (Kristen Stewart) side and less insecure for Gordy’s (Eddie Redmayne) side, even his name sounds cute, anyway the film is very good, even you can watch it with your Bf or GF, really nice movie. 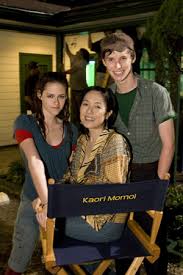